ORANGE COUNTY, Va (WVIR) –An Virginia man is celebrating after completing a pretty impressive accomplishment for his birthday.

The 92 year old skydived from over 17,000 feet up, becoming one of the oldest people to ever complete Skydive Orange’s “HALO jump”.

Christopher Wulin says it was his son, the owner of Skydive Orange, who first convinced him to take on the challenge of throwing himself out of an airplane. This was his second jump ever, and he went over 3,000 feet higher than before. “I’m not the kind of hero type; I want to do this for myself. I want to show that I have the courage to myself,” said Wulin. Wulin says he wants to live his last years to the fullest. So he’s doing something many might think impossible at his age. “I want to jump at the highest height I can do it. I want to jump every year until I’m 100,” said Wulin.

So with skydive instructor Mario Ripa on hand, the 92-year-old suited up Friday, and got ready for the ride of his life. Because of his age, and the 17,000 foot height he’d be jumping from, there are several safety considerations. Skydive Instructor, Mario Ripa said, “We wanted to make sure he had a good flow of oxygen on the airplane, that’s the reason we had the mask instead of the canon like we did.” They also suited him up with special equipment.

“With the pants and the equipment we wore, it allowed me to hold his legs up on landing, so he basically didn’t even have to touch down,” said Ripa. Wulen and Ripa boarded the plane and quickly rode to their jumping altitude. Then, with several camera men in tow, the pair took off. They fell for around a minute and a half before pulling the chute. Wulin says the scariest part was the wait to jump.

Ripa says Wulin has proved to him that skydiving isn’t just for the young. “Everybody pretty much can do it; it’s just whether you want to take a chance,” said Ripa.

Back on the ground, Wulin said he hasn’t had enough. “It was dandy, I’m ready to do it again,” said Wulin.

Wulin is the second oldest person to ever go skydiving at Skydive Orange. The oldest was a 93 year old woman. Wulin says he intends to beat that record in a few years.

Unfortunately the weather wasn’t ideal but nevertheless we still made a day out of it! We surprised Mr Wulin with a birthday cake and he had a blast! It was an absolutely delicious cake made by Knackals Bakery in Culpeper, VA

He was accompanied by his son Ned, his nephew Bob, Bob’s girlfriend Laura, his friend/caretaker Becky and some of the staff members from Skydive Orange. Pam Young made sure to get him the cake and make everything possible. Ned made it clear that his father liked Chocolate on chocolate! Even though he couldn’t make his HALO skydive that day, we made sure he still had a good time!

Christopher Wulin plans to celebrate his 92nd birthday on July 24, 2014 by making a HALO Tandem Skydive  at Skydive Orange, Inc. in Orange, Virginia. Mr. Wulin, whose son, Ned, owns the skydiving school at Skydive Orange, started this celebratory activity in 2013 by jumping from 13,500 ft. on his 91st birthday. This year, his plan is to skydive from 17,500 ft. From that altitude, he will spend 80+ seconds in freefall before he and his Tandem Instructor deploy their parachute at approximately 6,000 ft. Skydive Orange is the first drop zone in Virginia to offer high-altitude or HALO Tandems to the public.

Mr. Wulin retired from the nursery business 12 years ago. He owned Hickory Hill Nursery in Fishersville, Virginia with his wife and son. He started in the plant and nursery business as a hobby in 1963; and managed the family business from 1974 when he moved from Wayne, NJ to Virginia and established the farm and business in Fishersville. Prior to 1963, he was enlisted in the military and was a Veteran of the Second World War.

Since Mr. Wulin enjoyed his first jump in 2013, he decided he wanted to make the higher altitude skydive to celebrate this year. Jumping from the higher altitude, he will be required to use supplemental oxygen on the plane to prepare for the jump. Mr. Wulin now plans to make a skydive every year until he reaches 100 years old.

Press and media are welcome to join Mr. Wulin on July 24th at Orange County Airport for his skydive. To arrange interviews, or for additional information prior to the 24th, please contact Pam Young, Sr. Instructor at Skydive Orange, at 202-558-8650 or via e-mail at pam@skydiveorange.com. 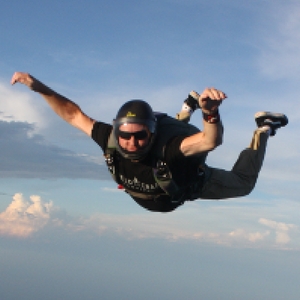