Check out Maria Keffler’s experience with Skydive Orange, then check out the rest of her blog, Wasting My Education!

Hubby turned 40 this past year. I did that a while ago. Go ahead, call me a cradle-robber. I always say, “Get ‘em young and raise ‘em like you want ‘em.” Mine’s coming along nicely.

So as this milestone birthday approached, I tried to find something really amazing to do for him. (‘Cause that’s just the way I am. Thoughtful, and all that.) We go out to dinner too much—I have to admit we can be kind of bon vivants that way. Anything he really wants he buys for himself. And any majorly big purchases (like, financially big) we’d need to discuss. So I consulted his bucket list. What did he really want to do, but hadn’t yet had the chance to try?

I contacted our son’s old Cub Scout troop, to find out the name of the company that did the impressive parachute demonstration at their annual camp-out a couple of years before. Then as soon as Hubby left for work the next morning, I called Skydive Orange and set it up.

“This is a surprise for my husband’s 40th birthday,” I told the woman on the other end of the phone. Several seconds of silence ensued before she asked, “Are you sure this is going to be a pleasant surprise?” “Oh, yeah. No doubt about that,” I reassured her. “He’s always wanted to jump out of an airplane.” “Okay, then. I’ve got you booked for two skydives.”

I choked on my orange juice and sneezed/coughed/hacked it all over the phone.

Hang on just a second there, Lady. This is a gift for my husband. Not a waking nightmare for me.

In the moments that followed, as I tried to clear my lungs, esophagus, and nasal passages enough to correct her erroneous math, it dawned on me: He will enjoy this so much more if I go with him.

Inside my brain Id and Super-Ego entered the ring swinging as Ego attempted to referee:

We will die in screaming, hurtling terror, splatted against the terra firma like a juicy horsefly on the hot windshield of a careening Kenworth!!!

We should do this for the husband.

You’re an idiot with a death-wish!

This is a chance to sacrifice our desires and overcome our fears to bless our spouse.

Guys, guys. Listen. We can always bag out at the last minute. 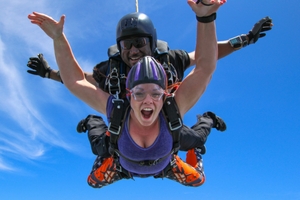 So I signed both Hubby and myself up for tandem skydives. And I spent the next few weeks getting my affairs in order. I farmed out our kids to three friends’ houses for the birthday weekend. I hugged and kissed each child tenderly in farewell, sure I would never again see my offspring, and gave to each of the families a list of contact numbers, a signed medical authorization, and a copy of our Last Will & Testament.

“We have an appointment at ten o’clock tomorrow morning. You’ll need to wear comfortable clothes and gym shoes,” I told him. I’d told no one of my plan, in order to keep it a complete surprise for Hubby until we arrived at the hangar. However, my OPSEC failed the night before the skydive, when I drove him to The Mayhurst Inn in the countryside of Orange, Virginia, and attempted to impart to him only the most necessary information.

He promptly grabbed the Things to Do Around Orange booklet that the B&B placed in our room, and cross-referenced the time it would take to get to various local points of interest with the clothing one might wear to said points of interest. An enormous grin spread across his face. “We’re going skydiving!”

Waiting for The Go

I don’t even particularly like to fly, I remembered as we pulled up at Skydive Orange’s facility.

We checked in, watched the video about the skydiving experience, and signed the paperwork that promised neither we nor our heirs would sue Skydive Orange in the event that we died in screaming, hurtling terror, splatted against the terra firma like a juicy horsefly on the hot windshield of a careening Kenworth. (It might not have been worded exactly like that.)

Our names popped up on the scheduling screen posted high on the hangar wall. My husband would dive tandem with K.R., I with John. When an employee of Skydive Orange passed by, I stopped her.

“Tell me, is John a compassionate man?”

Her head tipped to the side as she gave this query real thought. Then she nodded. “Yes. Just don’t throw up on him.” What would happen, I wondered, if I threw up on my instructor? Would he, in mid-air, detach himself from me in retribution? “He’s an empathetic puker,” she explained. “If you barf, so will he.”

Empathy. Yes. I like that in a skydiving instructor.

As we waited for our flight group to be called we sat on a bench and looked around the hangar. The enormous, open area in the middle was dedicated to repacking parachutes. Half a dozen people worked there, laying the deployed chutes out on the floor, organizing the lines and collapsing the entire apparatus in an impossibly intricate pattern of twists and folds that allowed them to fit perfectly inside their tiny little backpacks.

One of the folding guys, who looked like he might be getting close to his fourteenth birthday, wore a T-shirt that read, “Your Packer Secretly Hates You”.

I told him that those words did not inspire happy feelings in the students.

Then I asked him how he learned to do this job.“No worries,” he told me. “I don’t pack for the tandem instructors. Just for the independent skydivers.” He grinned. “On YouTube.” I’m pretty sure he was goofing me. Yeah. 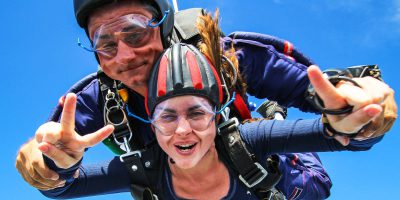 Going Up and Coming Down

“I am doing this for my husband. This is not for me; I don’t want to do this; I am scared out of every single wit inside my body.”

“Got it.” John nodded as he helped me into my gear. He turned me around to face away from him and he tugged at each of the four metal rings on my back, two at the shoulder, two at the waist, where I’d be connected to him.

“How many jumps have you already done today?” I asked him.

A few minutes later about a dozen of us– students with instructors and a few licensed parachutists on their own– climbed into the plane.

What am I doing?

“Slide all the way to the back,” John told me.

I’m not sure I really love my husband enough for this.

John fastened the clips of his harness onto the rings of mine. K.R. attached himself to Hubby. The plane took off down the runway, and I feared that the next time I touched earth it would be face first at terminal velocity. We would ascend to 13,500 feet before we jumped. Hubby warned me that I might start to feel a little light-headed as we approached that altitude.

Whatever. I was light-headed walking out of the hangar at an altitude of 5’7”.

Air thundered past the open door of the airplane and the earth took on the misty form of brown, tan, and green rectangles, way far down there.

I started to pray. “Our Father which art in Heaven…”

Then people started jumping out.

This is wrong! This shouldn’t be happening! This is a perfectly functional airplane!

My heels could get no purchase on the bay’s smooth floor as John scooted us down the bench. More of the people in front of me disappeared out the door.

“…hallowed be thy name…”

Then it was K.R. and my husband perched in the doorway.

“…Thy kingdom come, thy will be done…”

You know— They told us, back on the ground, that we would pause at the aircraft door, the student’s hands holding the shoulder straps of her own harness, as the instructor gave a nice, gentle countdown: “One, two, three, go.”

It sounded so… rational. So organized. So controlled.

What they neglected to point out is that if the instructor is holding onto the door frame, the student, who is strapped to the instructor’s chest, is dangling helplessly OUTSIDE THE AIRCRAFT!

And then we were tumbling, hurtling through the air, somersault upon barrel roll. The airplane slipped away through the azure sky, like the villain who pries the hero’s fingers from their grip on the penthouse suite’s balcony railing, then laughs maniacally as the man plunges to his death on the concrete sidewalk below.

I continued to attempt prayer as John got us sorted out and we faced downward, spread-eagled in a place God only intended for angels, birds, and very enthusiastic insects. 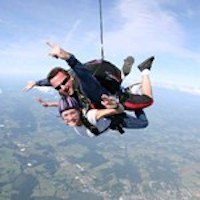 My gaping mouth migrated around my face in the blast of roaring air that assaulted us from below. The earth approached, a colorful brick wall that stretched from the horizon 360 degrees around us, and got bigger every second.

(I was not taking the Lord’s name in vain, by the way. Mine was a sincere attempt at a coherent plea to be rescued from the mawing clutches of approaching death-by-splatter.)

Then the parachute ripped out of the backpack, zipped up over our heads, snapped wide like the powerfully arched wings of a falcon, and yanked me away from the earth with the same gentleness of said falcon as its talons wrench a hapless lemming from his earthy burrow. For the first time that day, I thought that perhaps I would live to see another. And we slowed to a placid drift.

John asked me to reach up and take the hand-holds that would allow me to help steer the parachute. I indicated that I could not raise my arms, as the recently-deployed parachute had seized up the harness encircling my chest and was presently strangling two of my lady-parts.

“Oh, I can help with that,” John said. He reached around me and deftly released the strap around my upper torso.

And I fell six inches forward.

He assured me that I was still securely clasped into the harness.

The rest of the trip down, I must admit, was gentle and really quite beautiful. John took care not to make any sudden turns; K.R. and my husband, however, spun around in the sky like an adrenaline-saturated Beyblade joyriding in a Cuisinart. (Hubby loved it.) And we landed with barely a bump on the grassy field next to the hangar.

When afterward, in gratitude for my life, I moved to hug John, he stepped back. I suspect he still feared I was about to hurl on him. Apologies, John. You’re a fabulous instructor. And I hope you had other students that day who were much more fun than I was.

In the end, all I can say is that I’m one awesome wife for doing this for my husband. And he owes me big—BIG—when my 50th birthday comes around. 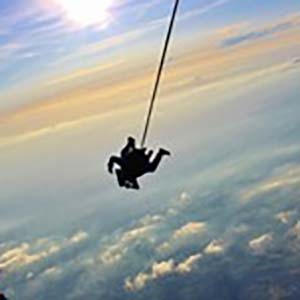 The first time you skydive is a tremendous event in your life. And I am so lucky to have found Skydive Orange.