Since its inception, skydiving equipment has come a looooong way. Over the years, some of the biggest changes have been made to those super crucial bundles of fabric we look forward to seeing on every jump. We’re talking about what makes skydiving possible at all: parachutes!

To understand just how far parachutes have come from opening to landing, let’s take a look back to what parachutes were like when “sport parachuting” began.

In the late 50’s and 60’s as sport parachuting was gaining traction, pioneer civilian skydivers used what little gear they could get their hands on. Typically, this was surplus military equipment.

At this time, all of the parachutes being used for jump operations were round. Some (if you were lucky enough to have access to the latest and greatest) were composed of a carefully coated fabric called “LoPo” (Low-Porosity). These “LoPo” parachutes reduced the rate of descent and were built to withstand damage during the skydiving parachute opening. You see, in those days, it was common for parachutes to sustain damage during deployment. In the case that your main parachute was damaged (which, back then was pretty likely), you’d use your reserve parachute. In those days, the primary main parachute was stored in a container the jumper wore on their back and the reserve parachute in a separate belly-mounted container.

In the early days, with the round parachute design, jumpers were almost entirely at the mercy of the wind: where the wind blew, you went!  Modifications were made in the 60’s and 70’s to create “steerable” round parachutes, but these were still a far cry from being considered maneuverable.  On “Old School” parachutes jumpers were more like cargo and less like canopy pilots. Landing was a matter of bracing for impact and getting ready to be “dumped” on the ground.

In the last 50 years, consistent technological advancements have been made to parachute canopies and skydiving containers. Long gone are the days of the round parachute in recreational skydiving! Though you may be surprised to know, a modified version of the porosity-reducing technology from the past is still being used in parachutes today.

Normal skydives are required to follow both United States Parachute Association guidelines and FAA regulations for gear. This means each skydiving container must contain two parachutes. Whereas in the past, this meant two separate container systems: one back-pack style and one belly mounted reserve container. Now, we utilize a dual parachute, single container system. This means both the main parachute and the reserve parachute are housed in the same “back-pack” style container.

In the past, parachute openings were pretty rough. Frequently, entire main parachutes would shred from the force of deployment. Now, parachute openings are much less aggressive. During the transition from freefall to canopy flight, you will feel how the opening parachute slows you down drastically. However, for what it is, it’s much gentler than you’d anticipate. One minute your freefalling, the next you’re hanging suspended in the harness with a canopy above your head. 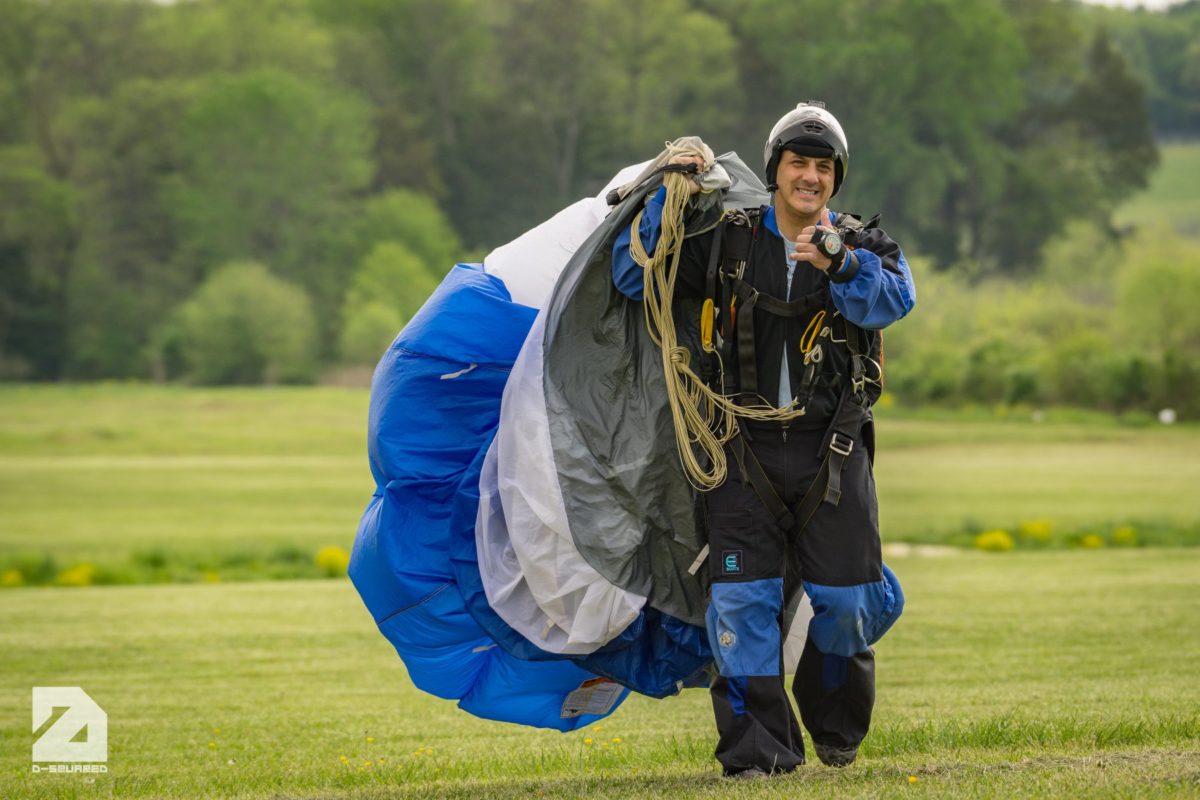 The ram-air rectangular design of modern parachute canopies provides today’s skydivers with a steerable, maneuverable ride to the ground. Using lines that connect to the back of the parachute, jumpers can really “pilot” the wing.  The lines cascade down eventually coalescing into a correlating connection point on each respective side. These lines are controlled by the jumper via a handle (called a toggle) attached to the bottom.

When it is time to land, the jumper will pull both toggles down in a smooth, measured manner to “flare” the parachute canopy. This will pull the entire back side of the parachute down, slowing the system and the jumper(s) attached to a safe landing speed. Often ending with a gentle tiptoe or slight slide.

As you can see, these days we’ve really got it made. From opening to landing, the parachutes we use today get us from point A to point B reliably. Have any more questions?…or are you maybe interested in learning first-hand about skydiving parachutes? Make a reservation at Skydive Orange today! We’d love to teach you everything we know!