Family, love, and loss: the poignant beauty of the human experience. The dropzone may not seem a likely stage for the coalescence of these layers of life. Yet, for the Pavelko family, Skydive Orange became the center of their remarkable story.

For siblings Maggie and John Pavelko, their first skydive is one they will never forget, and it all started with one perfect gift from their mother, Karen.

Christmas was a favored holiday of their mother.  With a chuckle, Maggie recalls, “The funny part is mom would start buying and saving for Christmas gifts in June.”

Wheelchair-bound, it wasn’t easy for their mother to get around, much less to shop for the perfect gift. But according to Maggie and John, their mother always went out of her way to give them each the best present she could. That’s not to say when the wrapping was removed the gifts were the usual socks, sweaters, or pajama sets.

Rather their mother made an effort to give them, what one could call “unique” items. On Christmas morning, with an air of slight consternation, the siblings would approach each present. They simply never knew what they would receive.

This year their mother seemed even more excited. Before Christmas she’d contacted her son, John, to run her idea by him: this year she would get Maggie a skydive.

John explains: “For whatever reason, my mother always had a difficult time buying Maggie presents. To be honest my sister is sort of difficult to buy presents for because she likes very specific things.”

While consulting with John and his wife Jacqueline about the exciting gift for Maggie, John revealed to his mother, he’d always wanted to go skydiving too. In fact, “I’ve always wanted to skydive and just never made it come together. I was supposed to go once or twice before with friends, but we’d gotten rained out or I had to go on a trip, or something happened where I couldn’t go.”

Certainly, that “Christmas” morning was one to remember. John describes the magical moment:

“We’re unwrapping presents and my mom gives my sister a small box and inside the small box is like a ring case. I thought I knew what she got her, but apparently, I must be mistaken because this is extremely odd. Maggie opened it and inside it was a rosary.”

Here Maggie interjects, “My facial expression went to like what are you thinking? I thought she fell off her rocker.”

John continues, ‘It was pretty funny. But my mom goes you’ve got to look in the bottom! And then my mom says you’re going to need it [the rosary]. Underneath was a picture and the description of the skydiving trip she wanted Maggie to go on.”

Maggie was surprised, to say the least. She explains: “I thought I literally was going to a cooking class.”

It was then John’s turn. Their mom played elf and handed him the next gift.

John continues: “It was a completely different shape and size. It was nothing like package “A.” And I had no idea what she got me for Christmas. Within it is also two small boxes. I don’t know what I’m expecting. But the last thing I’m expecting is another rosary and the skydiving information underneath it. Immediately, Maggie and I decided we are clearly going together. My mom was so proud of herself…She finally got the best possible gift for us. It was something we both really wanted to do. It was just an awesome gift.”

Unfortunately, their mother fell ill and passed away before the awaited skydiving date. During this time, Maggie and John were on an emotional roller coaster of highs and lows, sorrow from the loss of their mother, joy, and sleepless nights for John, from the birth of his third child. After a time, the two began to have space in their minds and lives to consider again the amazing gift from their mother. 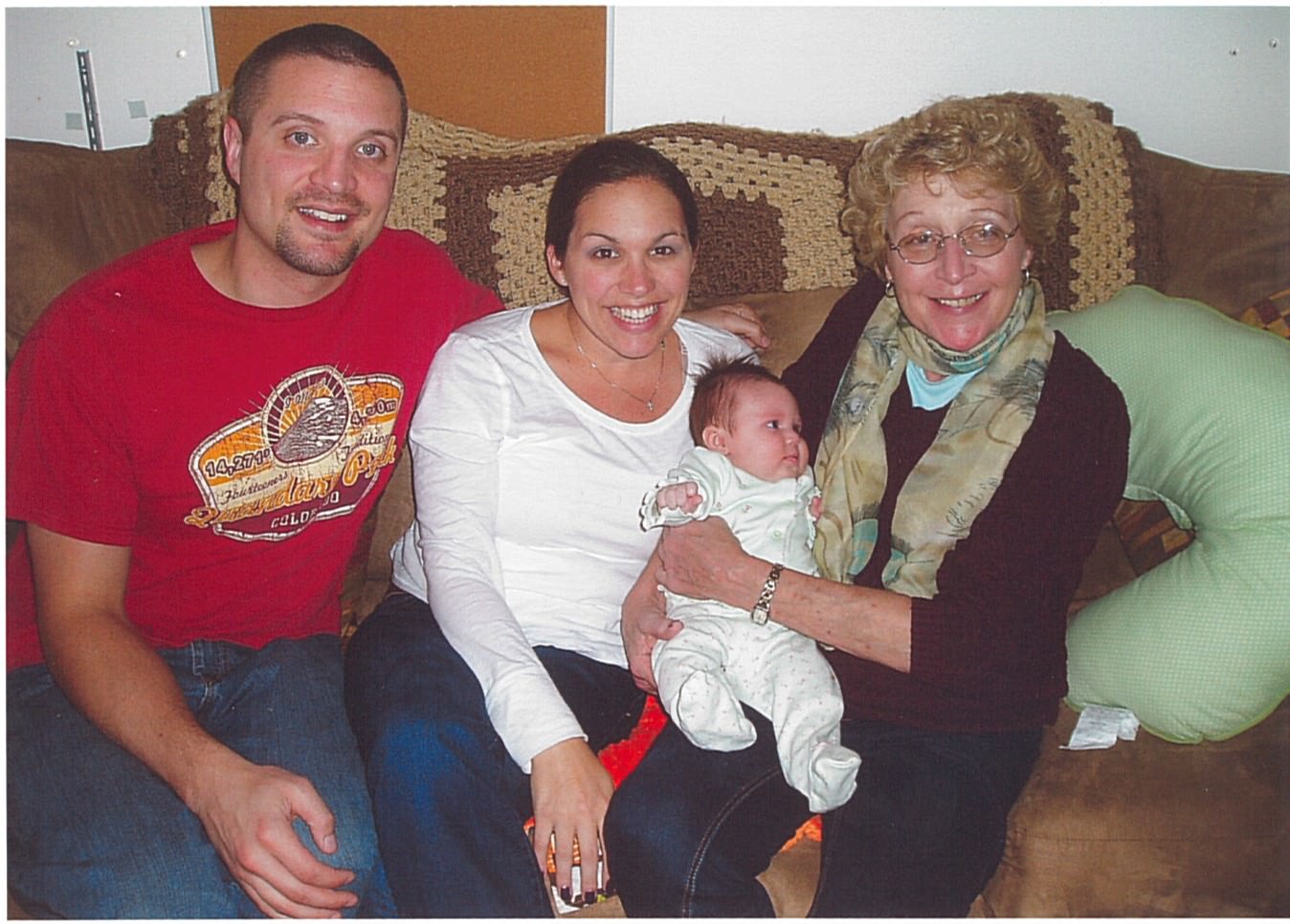 John tells us: “It was really rough. We got through it and Maggie and I started talking about what we were going to do about skydiving. Clearly, we have to go.” The two would make the skydive and their mother would still be there with them. Maggie explains: “John had the [ashes] and we decided we’re still going to bring mom. She’s still going to come and she’s still going to watch us.”

It made sense. Their mom had painstakingly planned the entire trip. To further elaborate on their mother’s thorough, scrupulous planning, Maggie shares that on her brother John’s birthday she received her own “birthday card” from their mother. The only thing is Maggie’s birthday is June 24th. Unsure of why she’d receive a card on her brother’s birthday, Maggie gave her mother a call: “And [mom] says “did you see it? Open the back, the last page” …She had glued the last page of the card down. I open it and inside is a hundred dollars. She’s like that’s so you guys can get the video for skydiving. You’re going to go in April, but your birthday is in June, so I wanted you to have the money before you go.”

John had also received a birthday card, and like Maggie’s tucked within a fold on the back page was $100 for the skydiving video. Their mother had truly thought of everything.

Maggie continues: “It was interesting. Because again she passed February 12th, but she gave us both a gift before she left us, and so we had that. And so, my birthday was June 24th and we went skydiving June 29th.”

The siblings’ father, John Sr., even joined them for the experience. Once at Skydive Orange, the two weren’t exactly sure what they should do. How could their mother come along?

Maggie says: “We had the ashes, and at first, we were just holding on to them unassumingly. I saw Pam – she’s like the mom of that dropzone – and told her part of the story. She hugged me and brought me into the office and asked the staff if they knew why we were here. [Pam] told them the whole story.”

From there, the staff took over and paired Maggie and John with two of their premier instructors Chris and Mario.

Maggie goes on: “Pam told us a story about her best friend that recently passed and showed us her friends ring that she’s wearing. She told us how in skydiving everyone is family, and they choose to celebrate life when honoring those that have passed. [Pam] stopped the whole place for us. From that moment, they took us under their wing.”

For John and Maggie, the Skydive Orange staff made every effort to make this moment perfect.

Maggie adds: “My mom was a nurse. Beside her kids, nursing was her number one. We had her nursing badge and her rosary beads that she gave us. All of that went in Chris’s pocket. Her ashes went in Mario’s pocket. When I was strapped to Mario, he would tap me, and say they are right here… We were the only tandems on that jump and the video is the most amazing thing. They interviewed us the whole way. It was just so moving.”

Moved by emotion, Maggie stops and John finishes: “it was an absolutely wonderful experience. It was like being with family. To be able to be with people you could tell genuinely understood and wanted to make it as important as it was to my sister and me, that was more than we could ever ask from anybody.”

Maggie begins speaking again: “Once we landed, they gave both of us a certificate and they gave mom her own certificate. What’s interesting is that while we were waiting to go, on a jump earlier, there was a wedding ceremony there. They brought an officiant and everything. And I think, they’re getting married we’ve got ashes. What is this place? There’s just all these life events at one center…and there was another crazy sign. There was a guy in a wheelchair there, and he did a jump. This place [Skydive Orange] was just so spiritual in a different way. I thought, there’s a reason for this.”

John speaks up again and ends our conversation with these words:” it was a crazy journey to get there, it was a wonderful experience, and we will remember it for the rest of our lives.”

Here at Skydive Orange, we will remember it too. We’re forever thankful that we were allowed a small, meaningful part in this family’s magnificent story.