You want to remember your skydive for the rest of your life, and you hope it is for the right reasons. The thing is you’ve heard some troubling rumors. You’d like to keep your pride intact when you land, so you were particularly perturbed when you heard that there was the possibility you’d pass out, pee your pants, scream bloody murder, or vomit while skydiving.

So, what does skydiving feel like if these confidence-shaking atrocities are verifiable possibilities?

We can guarantee skydiving will be unlike anything you’ve tried before. Let’s get down to brass tacks. What does skydiving feel like?

Do People Pass Out When Skydiving?

In truth, people have passed out during a skydive. However, the occurrence is extremely rare.

Is skydiving scary enough to steal the consciousness from a person? Not really. Typically, the individual “out cold” made one of these mistakes. 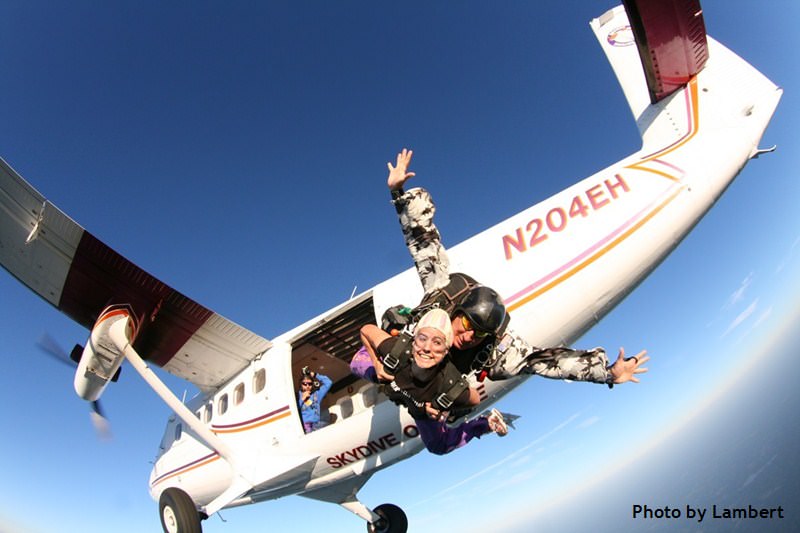 Do People Puke While Skydiving?

Oh, the horror of upchucking. Individuals that blow chunks on their tandem skydive typically do so because of the last two mistakes listed above.

Some are just dealt an unfortunate hand by fate when it comes to motion sickness. If you’re one of these poor souls, consider pre-medicating before your jump.

What happens if you vomit while skydiving? If you happen to spew either during your jump or once back on the ground, don’t sweat it, we won’t tell.

Do People Pee Their Pants Skydiving?

If you’ve had problems with urinary incontinence in the past, it makes sense to worry you’ll sport a wet mark for the cameras! However, rest assured, we’ve been around a while, and we have yet to see someone land and stand only to present wet britches. If that doesn’t convince you, consider that nervous bladder situations typically don’t occur on a skydive, because after being pumped with the adrenaline of a terminal velocity fall, the body’s reaction is to hold it in!

Last but not least…

You better bet your bottom dollar they do! In part, that’s the fun of it all. The louder the yell the better. Consider a scream like a release pressure valve. It helps to relieve all the tension and anticipation you’ve built up. Fill every bit of your being with air and let it out on your next jump at Skydive Orange!