There’s a hush over the crowd, each person stilled by anticipation. The room is filled from corner to corner. Individuals from nearly every walk of life are all huddled together, vying for a spot to see the television screens. A collective breath is suspended, held in, as the replay shows. A score appears. The crowd bursts to life, with cheers and yells and jubilation. They weren’t watching football or soccer or any number of “typical sports.” No, this crowd was waiting for the official scores of the last round of a national skydiving competition.

Surprised?  In disbelief? We promise we’re telling the truth. Skydiving is the sport that kept an entire room on their toes and had thousands of others checking-in to view the latest scores online.

Is skydiving a sport? To the mainstream, it may seem that civilian skydives are completed strictly for the adrenaline rush, and as skydivers, we must all be “real adrenaline junkies.”

This is somewhat true…at the start. A large faction of first-time skydivers are drawn in by the appeal of reaching new heights, literally and metaphorically, with the extreme sport of skydiving.

Though, if you speak with the individuals who have returned for more, eventually dedicating themselves to earning their skydiving licenses, the motivations for continuing to skydive are more than the adrenaline rush. Truth be told, the appeal of skydiving competition engages a significant portion of the skydiving community, not just in the United States but around the world as well. 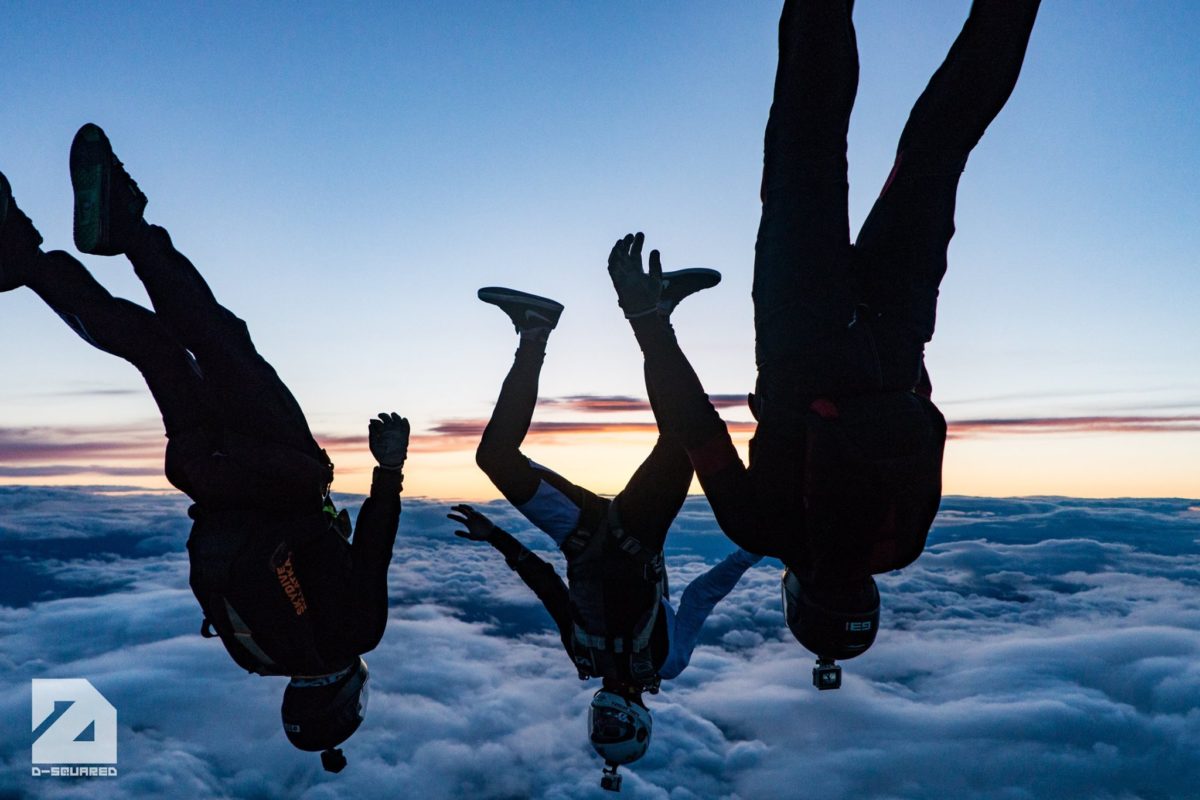 How is skydiving a sport?

A sport is defined as being a physical activity governed by a set of rules and engaged in competitively.  Skydiving is not just one sport, but rather, skydiving is composed of several disciplines, or types of skydiving. Within each discipline there are specific rules by which individual skydivers and their teams are judged. The type of skydiving competition an individual chooses is entirely up to them and is usually based upon their preference and the type of flying they enjoy.

Formation Skydiving is known to be one of the most competitive disciplines in all of skydiving. In this discipline, individuals are in a belly-to-earth orientation. Group sizes in competitive formation skydiving range from 4-16. Though, the most prevalent group sizes are four and eight. The goal of formation skydiving is to create a series of specific formations. Competitors are judged on creating the correct formations in the correct order as many times as possible within a set amount of time. Each team of formation skydivers has a camera flyer who flies above the formation to record the jump. 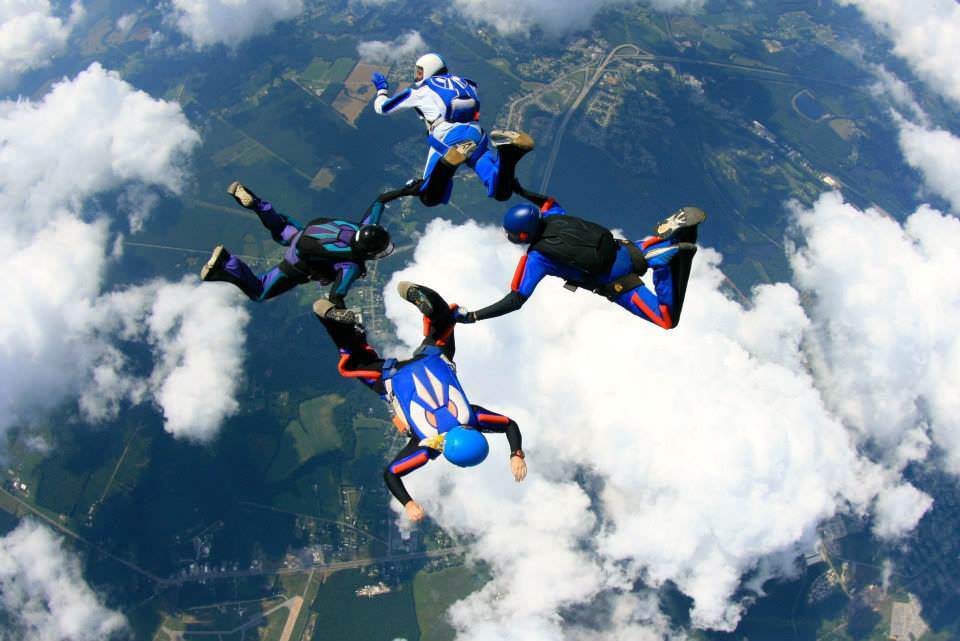 Freestyle skydiving teams are composed of one performer and one camera flyer. This type of flying is more akin to dancing than falling. This skydiving competition is divided into free routines—routines the flyer has choreographed themselves—and compulsory rounds, rounds where they must perform moves set by the competition. Jumpers in this discipline are judged based on interpretation and the difficulty of the moves performed.

Individuals in Vertical Formation Skydiving (VFS) are also attempting to create a series of specific formations in an allotted amount of time. However, the individuals in VFS do not fly in a belly-to-earth orientation, rather they fly in orientations such as head-up (like they are sitting in a chair) or head-down. VFS teams are composed of 5 members, 4 performers, and 1 camera flyer. 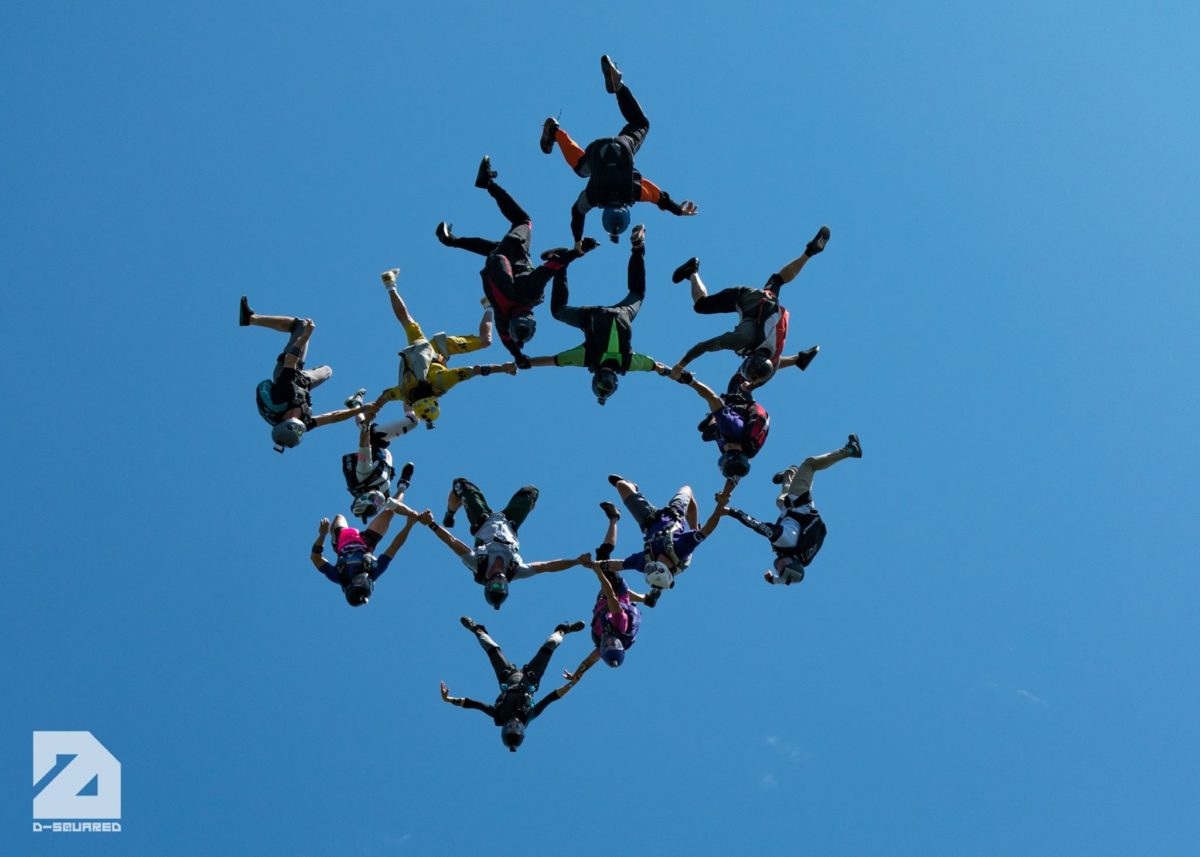 Skydiving competitions don’t just take place in the freefall portion of a skydive. There is actually a subset of skydiving competitions that deals strictly with parachuting ability. This discipline is further broken down into Canopy Relative Work or CRW, where multiple canopy pilots work together to create formations in the sky, accuracy competitions, where the canopy pilot attempts to land dead center on a target that has a two-centimeter diameter, and competitions measuring speed and distance, how fast the competitor traveled across the ground and how much distance s/he covered gliding across the ground with his or her parachute.

Wingsuit performance flying measures three different performance parameters of a wingsuit pilot (best lift, least drag, and best glide ration) by utilizing a GPS logging device. For the judges to collect the information, wingsuit pilots must complete three separate skydives focused on three tasks: a time task, a distance task, and a speed task. The data is then compiled and evaluated to determine an overall winner.

Wingsuit acrobatic flying is a skydiving competition where teams composed of two performers and a camera flyer display their skills. Like Freestyle, there are compulsory moves and free rounds.

Even though skydiving is most certainly a competitive sport, we want you to know…

Skydiving Isn’t All About Competition

Just as you can enjoy riding a bicycle but not necessarily have any aspirations to become a competitive cyclist, you can enjoy the sport of skydiving without becoming a competitive skydiver! So much of the joy derived from the sport of skydiving is from being a part of our truly unique community and taking advantage of the opportunity to have fun, to meet new people, and to learn.

Whether it is making that first jump, learning to skydive, or getting involved with skydiving competitions, Skydive Orange has just what you need. Reach out to us today and see what all the fuss is about!