This jump was brought to you by the letter “F”!

It’s true. After all, there are two f-words that tag along on every first-time skydive: “fun” and “fear.” Before you kick out one sibling for solo time with the other, hear this: there’s a good evolutionary reason they travel as a pair. To learn a little more about it, check out the work of science journalist Jeff Wise–who has been studying this phenomenon for years (as well as heading up a popular column for Popular Mechanics). In “Extreme Fear: The Science of Your Mind in Danger,” the aptly named Wise calls this pairing “the biological equivalent of opening the throttle.” That, my friends, is precisely what a first-time skydive does.

We can start by looking a the fun/fear physiology. (We’re hoping you’re not reading this out loud near someone else’s face.) The fear side primes us physically for danger—which delivers the actual-factual original (read: caveman) form of a chemical high, the “fight or flight” response. Without that little kick in the neurochemical pants, it’s highly unlikely that humans would have evolved to the drive-thrus-and-iPhones stage.

Fear makes us faster and stronger. A “fearless” caveman isn’t a stone-age badass to be back-patted for his reasonableness; he’s a bigger animal’s dinner. Fear’s attendant squirt of epinephrine (a.k.a adrenaline) triggers these awesome superpowers, and enough of it can give you the ol’ sewing machine legs. Another one of the hormones that’s released during fear-inducing activities is dopamine, a neurotransmitter that helps control the brain’s–get this–reward and pleasure centers. That, of course, brings us to the more popular sister: FUN. 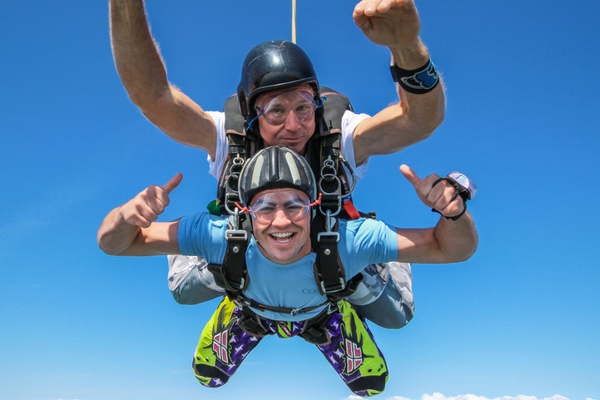 Lots of people enjoy the heck out of scary situations because it leaves them with a sense of confidence after it’s over: think horror movies enjoyed while sitting next to a crush; a haunted house at the fair; performing at a talent show and getting a standing ovation. Very pertinently to our purposes in the realm of skydiving, the chemicals that the body doses you up with during that fight-or-flight prep can work like glue to build particularly strong memories. When the scary situation is “conquered,” your spirit glows like a neon sign for ages.

So: now you’re prepared to take “fun” and “fear” as the fraternal-twin f-words you’re going to take with you into the sky. Remember, though, that there’s a third one that will be waiting for you on the ground. Here’s a hint: It starts with “f” and ends with “yeah!!!” (multiple exclamation points intentional). You don’t have to say it out loud if that’s not your style, but you’re certainly going to be *thinking* it…and that’s perfectly fine by us.

Fixin’ to freakin’ fly, friend? Phone forthwith! (You can book online, too, of course, but that doesn’t start with a, y’know, “fff.”) We’re looking ffforward to meeting you! 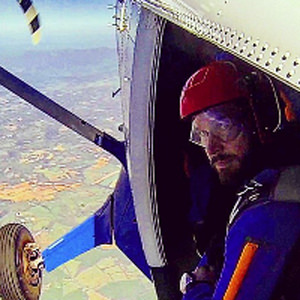